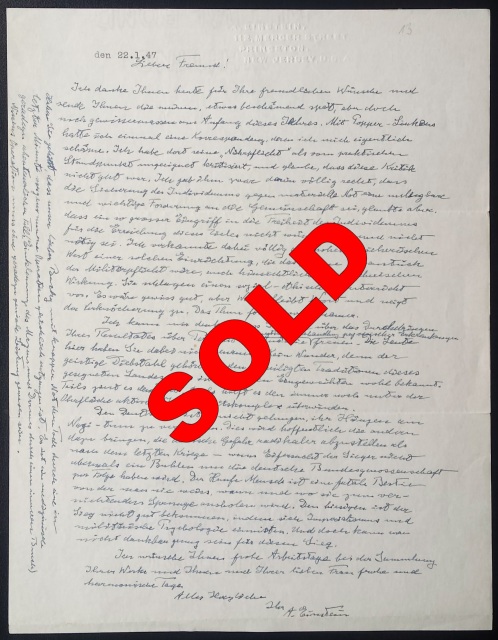 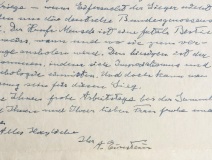 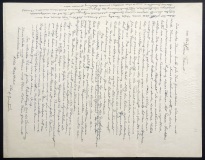 SKU:
£0.00
Unavailable
per item
Albert Einstein - a very important ALS written to his close friend, German psychiatrist Otto Juliusburger, on his blind-embossed Princeton stationery. Dated January 22, 1947. In the third paragraph he shares his frank opinion on the German's "attachment to Nazi-dom" and the negative consequences of victory on US attitudes: "The Germans have not succeeded in concealing their attachment to Nazi-dom. I hope that will cause others to destroy the German danger more radically than after the last war – so that jealousy of the victors will not result again in rivalry for the German confederation.  Mankind in the mass is a fatal beast about which you can never tell when and where it will destructively pounce. Victory has not been good for those here, as imperialism and military psychology have taken hold. And yet one cannot be grateful enough for that victory."
Einstein further opines that philosopher Josef Popper-Lynkeus is correct in stressing "that protecting the individual from material want was an undeniable and important duty of society", and goes on to criticize intellectual theft as one of the "hallowed traditions" of America. The one page letter is written in Einstein’s neat German script. Folded and in very good condition. Minor splitting - approximately 0.75 cm - to each end of the second vertical fold line. Sold with the original typed envelope.
Sold Out
Add to Cart
Full translation:

“Dear Friend, I thank you today for your kind wishes and send you mine, somewhat shamefully late, but still, you can say, at the start of the year. At one point I had a correspondence with Popper–Lynkeus that in a way I feel ashamed of. In it, I criticized his concept of a “duty to provide subsistence” as being impractical, and I am afraid that criticism was not good. I did agree with him that protecting the individual from material want was an undeniable and important duty of society, but believed that interference of such magnitude into the freedom of the individual was not desirable and not warranted for the attainment of the goal. In doing so, I totally failed to recognize the high instructive value of such a development, which would, after all, be the exact opposite of society’s requiring military duty, even concerning the instructive impact. You propose classes in social-ethics instruction. No doubt, that would be good, but talk remains talk and tends to ossify. Action has greater impact.

I can well imagine how excited you are that your research results in pernicious anemia and somatic treatment of psychological illnesses have been accepted. You did not mention the people here. Small surprise there since intellectual theft is one of the hallowed traditions of this blessed country, which is well-known to the initiated. It adorns the thief while also helping overcome the inferiority complex that still operates under the surface.

The Germans have not succeeded in concealing their attachment to Nazi-dom. I hope that will cause others to destroy the German danger more radically than after the last war – so that jealousy of the victors will not result again in rivalry for the German confederation.  Mankind in the mass is a fatal beast about which you can never tell when and where it will destructively pounce. Victory has not been good for those here, as imperialism and military psychology have taken hold. And yet one cannot be grateful enough for that victory.

Enjoy your days compiling your works. To you and your dear wife I wish happy and harmonious days. Warmly, A. Einstein
​
[A postscript written vertically in the left margin reads:] Have you heard that our dear Bucky narrowly escaped death thanks to surgery performed at the last minute? Apparently it was a case of medically adventurous proportions (obstruction of stomach and intestines caused by an interior hernia). Nissen’s surgery must have been the accomplishment of a genius.”

Juliusburg and Einstein’s friendship began in 1917 after Einstein’s nephew was treated by the eminent Berlin psychiatrist. Juliusburger, who specialized in addiction, combined his scientific work with philosophical ideas drawing inspiration from the likes of Arthur Schopenhauer and Baruch Spinoza. “As a Jew he was aware of increasing danger [in Germany]. In 1937 he was able to send his two children, one at a time, to the United States, and almost at the last moment before the advent of the infamous gas chambers, the parents succeeded in following their children,” at Einstein’s urging and with his financial support, (Albert Einstein, The Human Side: Glimpses from His Archives, ed. Dukas & Hoffmann). After his emigration in 1941, Juliusburger lived in New York City.

Josef Popper-Lynkeus (1838-1921) was an Austrian inventor and philosopher who counted among his admirers Max Brod, Ze’ev Jabotinsky, Stefan Zweig, Martin Buber, Sigmund Freud, and Einstein. While working as a private engineer and inventor, Popper-Lynkeus explored physics including the concept of quantum energy and the relationship between mass and energy that prompted Einstein’s famous formula E=mc2. Popper-Lynkeus was, however, also deeply interested in social issues. The letter we are selling here refers to his theory that society should provide for the individual’s basic needs as laid out in his two works: the 1878 The Right to Live and the Duty to Die and The Universal Civil Service as a Solution of a Social Problem penned in 1912.

The letter also mentions Juliusburger and Einstein’s mutual friend, Gustav Peter Bucky (1880-1963), who in 1913 developed a two-plate system that made x-rays of practical medical application. Like Einstein, Bucky immigrated to the United States in 1933, where he met the physicist while treating his wife Elsa. They became close friends, and Einstein helped Bucky patent some of his radiological inventions that included jointly filing a patent for a camera in 1935. The pair remained close with Bucky at Einstein’s deathbed.

​Rudolph Nissen (1896-1981) was a prominent Silesian surgeon who worked in Berlin and Istanbul before coming to the United States in 1939, where he was attached to Massachusetts General Hospital and Maimonides Medical Center in New York. In 1948, the year after this letter was written, he treated Einstein for an abdominal aortic aneurysm. It was upon his release from the resulting hospitalization that photographers famously captured an image of Einstein with his tongue sticking out. The physicist sent the photograph to Nissen with the inscription “To Nissen my tummy, the world my tongue.” Upon Einstein’s death several years later, an autopsy determined that his death was caused by a leaking abdominal aortic aneurysm.