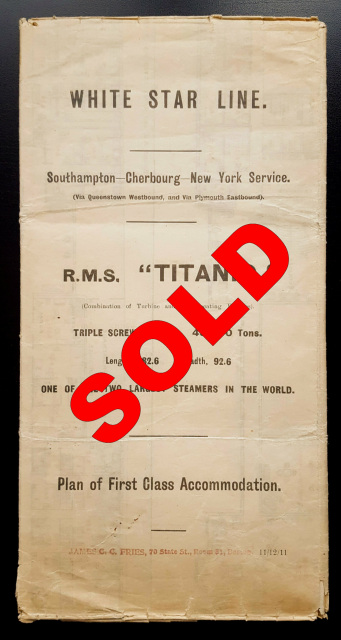 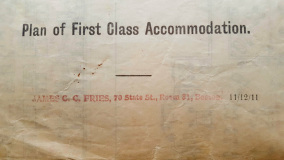 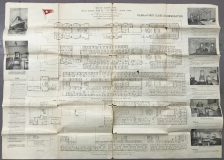 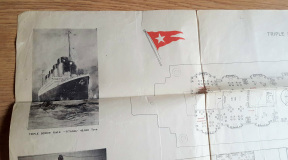 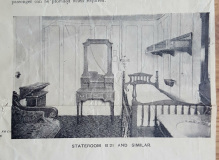 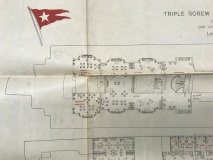 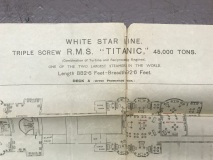 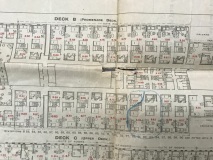 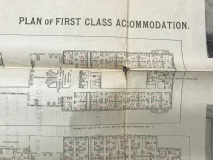 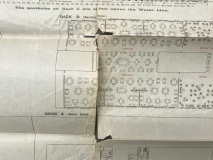 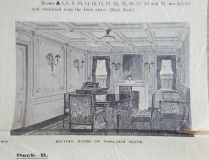 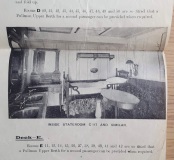 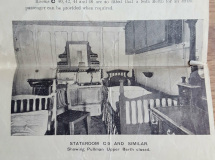 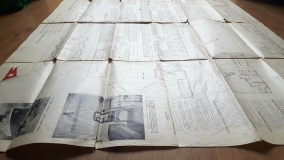 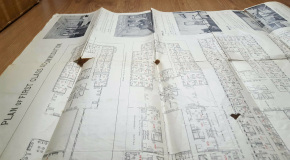 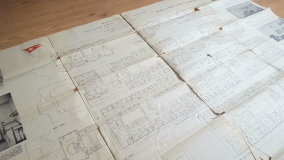 A rare White Star Line First Class Accommodation Plan for the ill-fated Titanic. Dated 11/12/11 and stamped with the original recipient's name, "James C. C. Fries" of Boston. This highly desirable printed promotional plan of the Titanic’s first class accommodations, measuring 5.25 x 10 inches folded and opening to an impressive 40 x 29. The outside panel labeled “'White Star Line. Southampton-Cherbourg- New York Service (Via Queenstown Westbound, and Via Plymouth Eastbound) R.M.S. 'Titanic.' (Combination of Turbine and Reciprocating Engines). Triple Screw - 45, 000 Length, 882.6 Breadth, 92.6 One Of The Two Largest Steamers In The World. Plan of First Class Accommodation." Inside, embellished with the famous White Star flag, shows the detailed ground plans of every First Class cabin over several decks; plus First Class Smoking Room, Lounge, Gymnasium, Restaurant, and Staircases, with 7 margin vignettes showing photographs of the rooms and a painting of the ship at sea; and with details of the facilities offered: “Restaurant. - In addition to the regular Dining Saloon there is a large modern a la carte Restaurant, on Deck B, where meals mat be obtained at any time between 8 a.m. and 11 p.m. at fixed charges… The Restaurant is under the management of the Company, who have appointed Mr. L. Gatti, late of Oddenino's Imperial Restaurant, London as manager. Turkish, Electric and Swimming Baths. - A fully-equipped Turkish Bath is situated on Deck F, consisting of the usual steam, hot temperate, shampooing, and cooling rooms… A Gymnasium, fully supplied with modern appliances, is situated on the Boat Deck, and is open for exercise by Ladies and Gentlemen during the same hours as the Baths… A Squash Racquet Court is provided on Deck F, and is in charge of a professional player. A Verandah Cafe and Palm Court situated on Deck A, where light refreshments are served.”

In good antique condition. Numerous separations, mainly along fragile intersecting folds. The most notable being the bottom part of the central vertical fold. Uniform light age toning. The original owner appears to have circled where his room was booked in blue crayon. No sections or pieces of the plan missing.