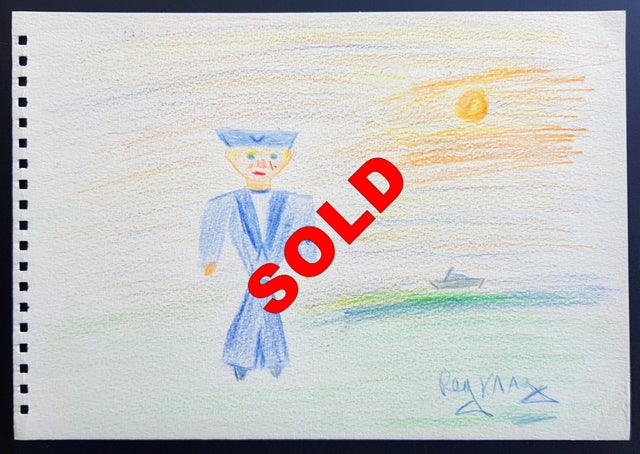 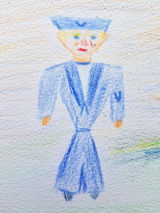 An original crayon drawing of a sailor by infamous British gangster Reggie Kray. The sketch was one of many items sent to a young boy named James Fallon who was left paralysed after being hit by a speeding car, and unable to breathe or swallow without medical assistance. Both Reggie and Ronnie - despite being incarcerated for murder at the time - were keen to help when they heard of James's plight. This began a surprising friendship between the twins and the unfortunate schoolboy, with drawings, letters, poems & Christmas cards sent to James. Sadly James died 18 months after his accident, aged just 11 years old. This colour sketch of a sailor was drawn by Reggie and signed in blue crayon along the bottom. It was one of six drawings that Reggie sent to James for Christmas 1989 (some other images from the book can be seen in the last image). Drawn on thin card, the page measures 10 x 7 inches. In excellent condition, with unobtrusive creasing to a couple of the corners.

Reginald "Reggie" Kray (24 October 1933 – 1 October 2000) was one half of the notorious Kray twins. With their gang the Firm, they were the foremost perpetrators of organised crime in the East End of London during the 1950s and 1960s. The Krays were involved in armed robberies, arson, protection rackets, assaults and the murders of Jack "The Hat" McVities and George Cornell. They were arrested on May 8, 1968 and convicted in 1969, largely a result of the efforts of detectives led by Superintendent Leonard "Nipper" Read. Both were sentenced to life imprisonment.